This is by the way quite strange that you have a possibility to save build definition as a template for future use, but such template is then available only in the same team project. So basically it is usefull when you are going to have many build definitions in one team project. But when you want to reuse a build definition in other projects, because for instance you use many build steps, many variables and setting and many of them are the same for all of your projects, then you have to deal with this limitation.
Fortunatelly the Visual Studio Online and TFS 2015 comes with Team Services API which you can access and which allows you to programatically perform various actions on your build  system. It also allows you to manage all build definitions. There are .net libraries created by Microsoft which facilitates working with the api and which I am going to use.
Lets create new console app project in Visual Studio 2015, name it TfsCloneBuildDef and add following nuget pakages

When I wrote this post both of above packages are available in stable version of 14.89.0. Now we can implement our application. For the sake of the simplicity I will skip negligible code and focus on the most important part, as you can download whole solution from the attachement of this post. So the core method which will clone the build definition will look like this 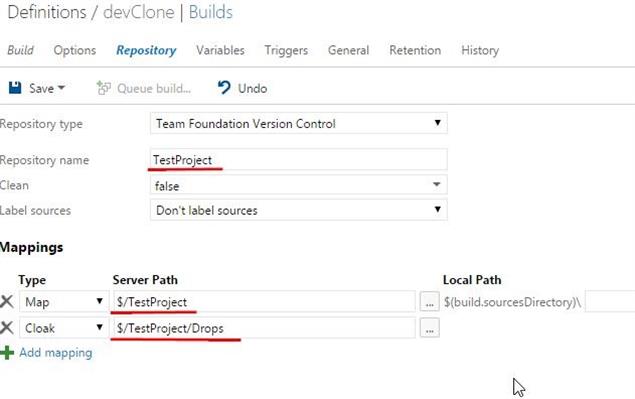 or the Triggers section 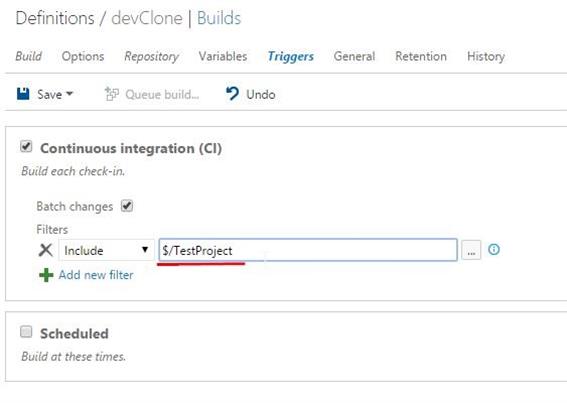 But we can handle this automatically as well, which I will show you later.
Now we can test our application. Let’s assume I have team project called TestProject with a build definition with name dev and id equal 6. I also have project called TestProject2 which I want to have the same build definition as the former one. Then all I need is to do this

Quite easy, isn’t it? Now we can add an import method as well.

Here we can additionally provide a different name for the build, just in case we already have a build definition with that name. This is also the place where we could adjust the build definition to the new project we import to. Since we have a json file we can easily search its content and replace all occurences of the old project name with the new project name.
Download attachement - 12 KB
Leave a comment

Hi, Thanks for the example above. I'm looking at cloning the build & release definition in vs2017 and I was able to follow your example and all works fine, but the artifacts link to source [from release def] is not getting set and throws exception as Bad request when i try to set it. Step-1: I clone a build definition, change the name post it back, store the new build-id for step2 Step-2: I clone a release definition, change name and other properties, but it does not allow me this below clonedef.artifacts[0].definitionReference.artifactSourceDefinitionUrl.name = appName; clonedef.artifacts[0].definitionReference.definition.id = newBuildDefId.ToString(); // ERROR Any help is appreciated. thanks, SM

Thanks for sharing code with Clone Build defintion in TFS 2015. Can you share sample for Clone Release defnintions in TFS 2015? I couldn't find clone release defintion anywhere?

Thanks for the code, however - it appears that this does not clone the steps, or I could be missing something. Been searching for days trying to resolve this. I came across this thread https://translate.googleusercontent.com/translate_c?depth=1&hl=en&prev=search&rurl=translate.google.com&sl=pt-BR&sp=nmt4&u=https://dennisdel.com/blog/getting-build-steps-with-visual-studio-team-services-.net-api/&xid=17259,15700002,15700022,15700186,15700191,15700248&usg=ALkJrhiLTEaHs6IwweUVvyznIVF52YPSGw but still have had no luck cloning the steps. In my case, I'm just trying to clone the build defs to build from a release branch so the only thing I need to change is the build def name and the source code location to a new branch.

That link in my last post goes nowhere...google: DEN DELIMARSKY "GETTING BUILD STEPS WITH VISUAL STUDIO TEAM SERVICES .NET API" and he shows the namespaces but I'm not sure how to implement it.