We are installing a Team Foundation Server on a Windows Server 2012 R2. You can choose many installation options. Single server, where you have a tfs database and the server itself on the same machine. Dual server, where tfs database is located on a different machine. Multiple servers where you can deploy your application tier across multiple machines. In this guide we will use a single server configuration.
There are plenty of guides on installing the TFS server. The instructions on MSDN or Ban Day installation guide are sufficient to start in my opinion, so I will point you to these resources and skip the installation step in this post.

Once we have the TFS server installed on the remote machine we also need to configure the firewall rules so we can access it from local pc. By default the tfs installer add new incoming firewall rule on port 8080, which is the default port for accessing the TFS web portal. However you may find problems accessing the web portal from the local pc. Then first thing is opening the Team Foundation Server:8080 rule and checking the Advanced\Profiles section. It would looks like this 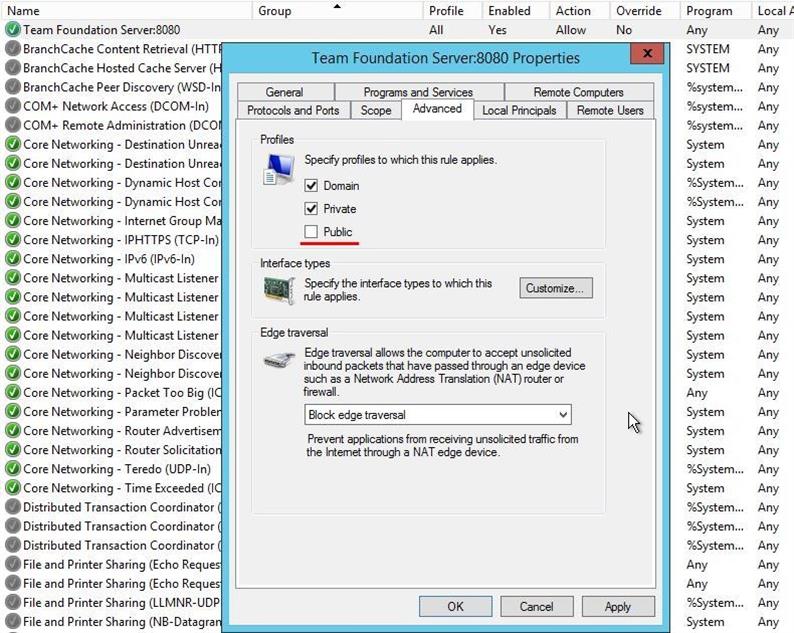 We need to include - check the Public profile and save the rule. This will apply the rule to the public network as well so we will be able to connect over the insecure internet connection.
Important note: For production environment use HTTPS protocol to access the web portal.

Once we are done with the installation and firewall configuration we should be able to access our Team Foundation Server via web browser on http://server2012:8080/tfs/. We will be asked for the credentials and we have to provide the user name and password for the account we created during the TFS setup.

Next step is to configure the build agent. In Team Foundation Server 2015 we can have many build agents. Each of them can be running on a different machine. The build agent works on one team project collection and must be first deployed to the target building machine. More on that can be found on MSDN. If we run the TFS setup with the default settings then we already have a team project collection callled DefaultCollection and we also have the default agent on this collection ready to be configured and register. We can check that on http://server2012:8080/tfs/_admin/ 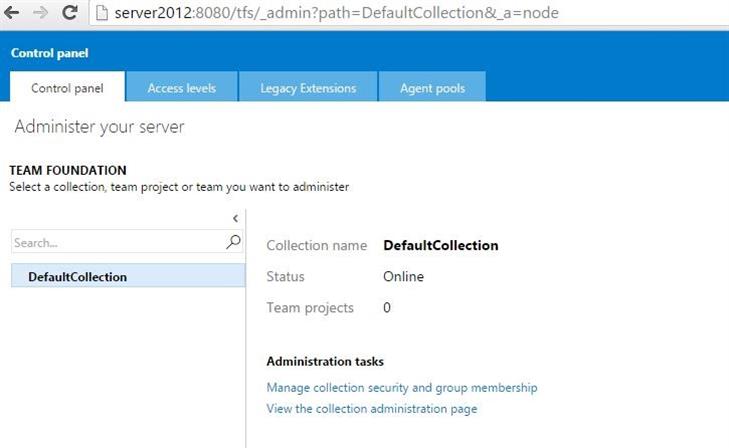 And in Agent pools tab

Here you can see that no build agents are registered yet. You will however have a default one here visible and running if you check the option during the TFS setup which says

I didn’t do it, so will have to configure the agent manually. You can configure and register new agent by clicking on Download agent. You will get the zip file, which you have to copy and extract on the target machine where you want the agent to be running. Then you have to run the ConfigureAgent.cmd script and follow the prompts to setup the build agent. In this guide I will however show you how to use the default agent which is created during the TFS installation. Note that having the build agent running on the same machine as TFS server is efficient only for small production team or for evaluation purposes. The configuration process of the agent is the same for default agent as for non default agents so you will have to go through this step anyway.

Go to the TFS server machine and navigate to

and run the ConfigureAgent.cmd script as a administrator.

(You will not see the question for the replacing agent and server registration for the first time. I get it since I have been repeating the agent configuration more than once).
The settings here are

Now it is time to create the team project. To do that we have to connect to TFS with Visual Studio. So start Visual Studio 2015 and add a Team Server Connection Connect to the DefaultCollection then configure and map your local workspace in TeamExplorer. Create new team project 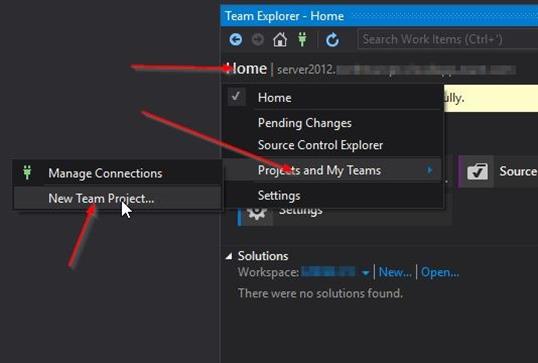 Set its name, process template and the source control to be Team Foundation Version Control or Git. Create new console project and add it to the source control. Save the code under two level subfolder like this 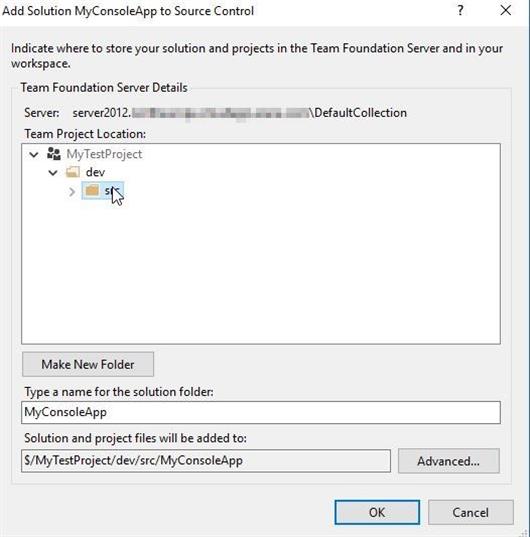 Save the project and commit changes to the repository.

Now you should be able to navigate to the team project dashboard http://server2012:8080/tfs/DefaultCollection/MyTestProject/_dashboards. You can find the documentation about the TFS web portal on MSDN. In this post we only want to create and queue a simpe build definition, so click the Build section navigation link. On the next slide select the source project repository and check the Continuous integration (build whenever this repository is updated) so it will build the sources on every commit. More resources in this topic here. Click next and save the build definition with all its default. You can now queue the build and check if it works. It will however fail to build with an error similar to this one

This is caused by lack of Visual Studio compiler on the agent machine. This is true since we didn’t install the Visual Studio there and we don’t want to install it on the build machine. So the only solution is to use the msbuild compiler instead. Create new build definition from empty template and add new build step to it (section build –> MSBuild). Queue the build and you will see that now it will succeed. The build agent took the msbuild version installed with the .Net framework and used it to build the solution. 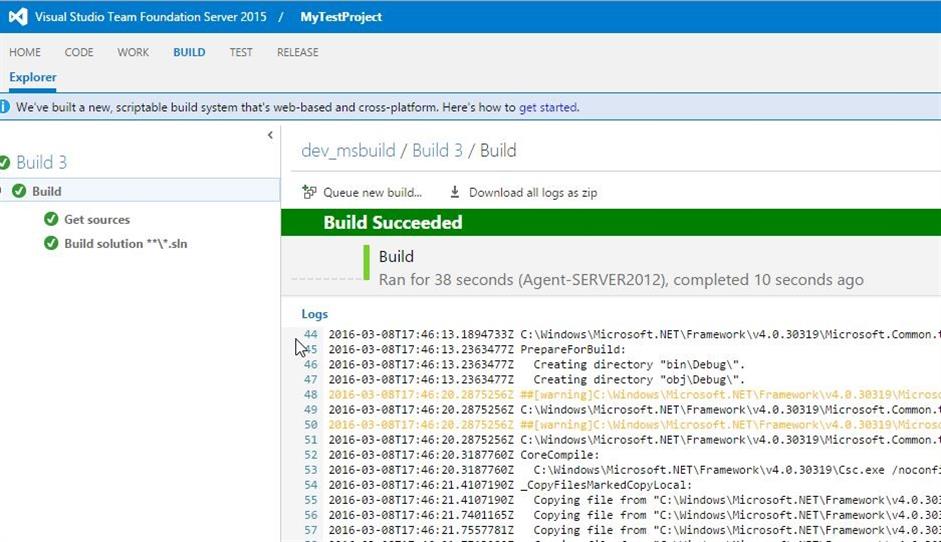 Instead of installing the full Visual Studio on the build agent machine we will install the Microsoft Build Tools 2015 which will provide the latest version of MSBuild and compiler tools. You might however still get some problems. For instance when building a web application project you may get the error like

To fix that simply copy the missing folder from where you have the Visual Studio 2015 installed.

That’s it for this time. In next posts you will see how to configure the build definition template and how to create custom build steps.